How Old Do You Have to Be to Skydive?

We’ve all seen the Instagram-worthy pictures and videos of thrilling skydiving experiences. It’s one of the most fun adventures you’ll ever take, and kids would love to join in.

Youths excitedly beg their parents to let them freefall, and some might even consider letting them. But how old do you have to be to legally skydive?

We’re here to answer all your questions about how old you need to be to take your first freefall. 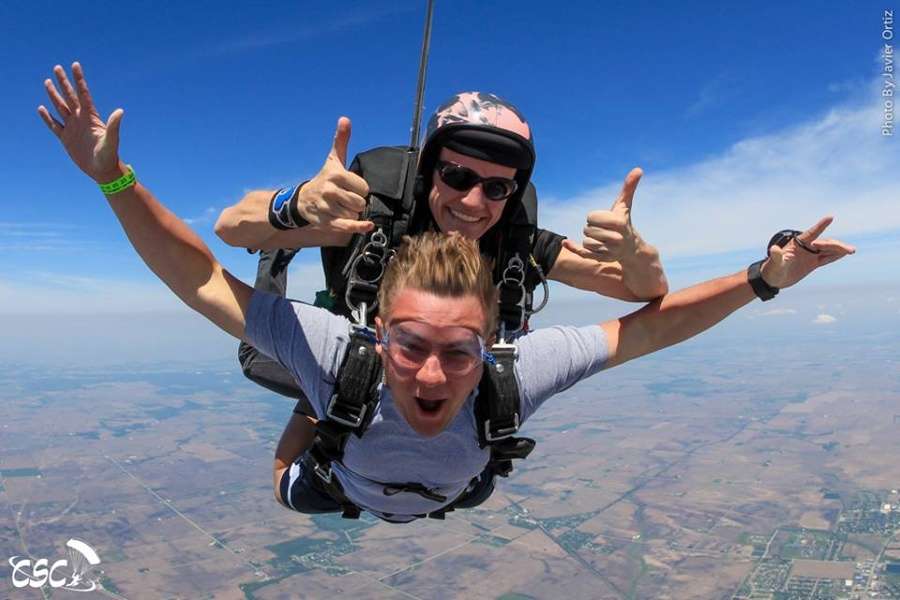 Just like how there’s a weight limit to skydiving, there’s also an age limit.

According to US law, someone must be at least 18 years old to skydive. Even if a minor has parental consent and jumps with a trained, adult instructor, they must be 18 years old at a minimum.

This minimum age limit was deemed by Federal Aviation Administration (FAA) law and is strongly enforced by The United States Parachute Association and all USPA-affiliated dropzones. Dropzones can get into big trouble for letting a minor skydive — not to mention the legal trouble that would come with it — and the penalties are far too steep to try and “sidestep” the law.

Legally, someone can skydive the day of their 18th birthday, so if a teenager is itching to take the plunge, it could make the perfect birthday present.

It’s worth noting that there’s no stated limit on the maximum age someone can be to skydive. As long as the person in question is in good enough health to take the jump, they can proceed whenever they’d like. In fact, an Australian woman set the world record for being the oldest skydiver at 100 years old!

Why Is 18 the Age for Skydiving?

Depending on the country, the minimum age for skydiving may vary. So if other countries allow minors to skydive, why is the age restriction 18-years-old in America?

At the core of it all, the minimum age to skydive is 18 because it’s the law. Just like you have to be 21 in the U.S. to drink alcohol (which also varies by country), there’s a law about the minimum age to jump out of an airplane. Currently, the law states that a person can’t skydive until they are legally considered an adult.

This is because of the risks associated with the sport. While skydiving is inherently much safer than many assume, skydivers are required to sign waivers to protect the dropzone in case of any accidents, and this requires the signature of an adult who’s fully capable of understanding the risks they’re taking.

While Chicagoland Skydiving Center has maintained a perfect student safety rating 50+ years in business, we highly respect the rules set in place by the FAA and USPA and would never allow a minor to tandem skydive so long as our regulatory bodies deem it unfit.

Will the Age for Skydiving Ever Change?

Despite current regulation, it’s possible that the minimum skydiving age could change. Over the years, there has been debate over the appropriate age to skydive in the U.S. Back in the 1960s, the minimum age was 21. In 1970, it was up to each individual state’s age of legal majority, which ranged from 17 to 21. For a while, some dropzones even allowed 16-year-olds to freefall with parental consent.

With this history in mind, there’s certainly a possibility that the minimum age to skydive could change again. Still, we don’t foresee it shifting again anytime soon. While this was a major discussion several decades ago, it’s not as pressing of an issue today. The only way this could change is if the legal age of adulthood was amended in the United States nationwide — which would be a major undertaking.

Does Every Dropzone in the U.S. Require You to Be 18?

Yes. You must be at least 18 years old to tandem at a dropzone. The only exception would be if a dropzone requires you to be older than 18 to skydive.

In some cases, individual dropzones may choose to increase the age limit — for instance, requiring you to be at least 21 to skydive — for added safety. That’s at the discretion of every dropzone and could vary across the board, so be sure to ask your skydiving center before assuming it’s 18.

The Answers to All of Your First-Time Skydiving Questions!

We hope that this article answered all your questions about the minimum age limit for skydiving, but we know first-time skydivers often have quite a few inquiries.

Download our Guide to Tandem Skydiving for a long list of FAQs and helpful beginner’s information for making the most of your first freefall.