Parachuting vs. Skydiving: What’s the Difference?

Throughout the years, parachuting and skydiving have been used interchangeably to describe the same idea — jumping out of a perfectly good airplane.

In this blog, we’ll define parachuting and skydiving before looking at four major differences between the two sports. 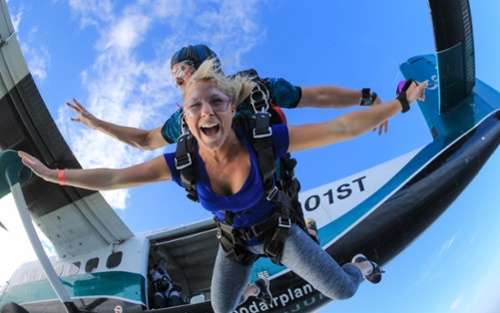 Parachuting is the process of controlling a descent to the ground by means of using a parachute itself. The parachute can come in a variety of shapes, sizes, and colors, and parachuting can have a wide variety of purposes.

You may have seen parachuters at sporting events or special occasions, and you may have also heard of paratroopers in the military who use parachuting for combat purposes.

Skydiving is the process of jumping into a controlled freefall for a long vertical distance (typically several thousand feet) before using a parachute to safely arrive at the ground. Skydiving is practiced as a hobby and an extreme sport, and it’s known for producing an adrenaline rush that few other activities can match.

Many people have skydiving on their “bucket lists” for the unique thrill of falling through the air and arriving safely on the ground, and others — like our skydiving instructors — have turned it into a career.

With both of these terms defined, let’s take a look at the fundamental differences between parachuting and skydiving.

Definitions are nice, but sometimes it helps to have a side-by-side comparison.

Freefall is the phenomenon of plummeting through the air without a parachute active.

Depending on their jumping altitude, skydivers typically enjoy 30 to 90 seconds of freefall while they’re unencumbered by any safety net. It’s not until they get closer to the ground that they deploy their parachute for a few minutes of breezy floating before touchdown.

In contrast, most parachuters release their chute soon after they’re out of the aircraft. This means they’re in freefall for a much shorter amount of time, and they have a much more controlled descent than skydivers may. It also takes longer for a parachuter to reach the ground than a skydiver simply because the parachute is deployed so much earlier.

Because paracuters have their chute deployed for almost all of their fall, they’re moving at a significantly slower rate than skydivers. Their parachute immediately softens their acceleration, “lifting” them with the upward force of air collecting inside of the parachute.

A parachuting jump may start around 5,000 feet in altitude. This is about all the higher you want to go so that you could get favorable winds, oxygen levels, and temperature as you reach the ground.

Skydivers, on the other hand, rush toward the ground at a faster speed (up to 120 mph) and accelerate to that speed quickly when they are freefalling without a parachute deployed.

This is why skydivers need a higher altitude — to enjoy freefall to its fullest. At Chicagoland Skydiving Center, we offer jumps between 9,000 and 18,000 feet in the air, which take a little less than 10 minutes to complete from the moment a skydiver leaves the aircraft.

The first parachute jump was engineered by balloonist André-Jacque Garnerin, who jumped from the basket of his hot air balloon in 1797. It wasn’t long after this revolutionary discovery that others began to see the utility behind the concept of a safe, controlled descent through the air. Parachutes soon became an integral part of military operations over the coming centuries.

Modern parachuting is often pursued by paratroopers and military personnel these days, as opposed to a recreational activity. Parachuters are often paratroopers who are using their chutes as a quick means to get from air to ground.

Skydiving, on the other hand, is much more of a hobby. In fact, it’s classified as a sport (and an “extreme sport”) by those who pursue it professionally. Sponsorships and teams exist throughout the world, most notably the Red Bull Skydiving, based around complicated acrobatic routines that take place during freefall.

There’s also some area of overlap between parachuting and skydiving in terms of practice. High altitude, low oxygen (HALO) jumps are practiced as stealthy means of deploying troops by the military and also as an adrenaline-pumping opportunity by skydiving athletes.

Perhaps one of the most notable differences between parachuting and skydiving is the requirements to jump by yourself.

Parachuting has fairly lax requirements to commit to a solo jump since the parachute is constantly deployed, there are multiple pulls to deploy the parachute, and a litany of other safety measures. In fact, there are now self-deploying parachutes that kick into action once the parachuter hits a certain altitude.

However, skydiving is significantly more strict because of the element of freefall. Freefall, for all its fun and adrenaline rushes, is inherently dangerous since you can reach speeds near terminal velocity.

(That’s the speed at which you can no longer accelerate in freefall — it doesn’t mean you’re going to die once you reach that speed.)

Skydivers also have automatic parachute deployment, but again, freefall makes things different. The jumper needs to be able to read an altimeter and other instruments as they’re in freefall, which is phenomenally challenging without the proper training.

First-time freefallers don’t know how to read altitude devices nor do they have the experience to judge when it’s necessary to release the chute with enough time to slow down before reaching the ground.

While all skydiving parachute backpacks are required to have an automatic activation device (AAD) that senses altitude and deploys the parachute, this backup “reserve” chute is intended for emergencies only.

Altogether, these are the reasons why you must be licensed to jump by yourself as a skydiver. It’s also why non-licensed individuals must jump with a certified, licensed instructor in a tandem skydive.

In order to freefall on your own, you’ll need to go to “skydiving school” and get a skydiving license.

Skydiving for the First Time?

If you’re considering trying skydiving for the first time, we have the perfect resource for you.

In our Tandem Skydiving Guide, we’ll explain everything you need to know about the experience. From what to wear on the big day to the mechanics of how your parachute works, you’re sure to take a few tips away from this comprehensive look at tandem skydiving for beginners.