Building the Best Place to Skydive

Chicagoland Skydiving Center relocated from its original location in Hinckley, IL to the Rochelle Municipal Airport in Rochelle, IL in the spring of 2011. This move marked a major shift in the business. The fresh start in a new location provided the opportunity to realize a vision for creating the best place in the world to skydive. 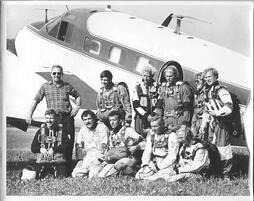 There had been skydiving in Hinckley since 1968 and I only ran the operation since 2000. Who was I to uproot that heritage and start something completely new? The location had been home to the original Chicago area skydiving school, a place where thousands of skydivers got their start over many decades.

I was terrified to make the move, but I knew the end was approaching in Hinckley due to a strained relationship with the land owners. I was faced with the decision to shut the doors and liquidate our assets and plot a new course for my life or to pack CSC into trucks and storage units and cross my fingers that I had what it took to cross the chasm. It's never easy for a business owner to face such a scenario. The skydiving industry was evolving and I had a vision for a completely different kind of facility, run by a team that would lead the industry in operations and customer service. Our dropzone in Hinckley was a tight family and I felt confident that people believed in us to take on the big challenge. 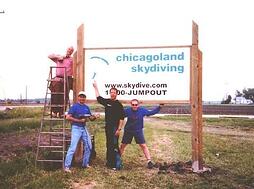 In retrospect, I underestimated the toll it would take on me personally - my family, my ability to separate mentally from work, and a new level of financial stress. The time, staff, finances, and relationships it took to pull this off was pretty amazing. The success of what we've created in Rochelle in just a few short years can be distilled down to one thing - the people. The CSC Team stepped up and did whatever they had to do. It was our goal to not just move, but completely redefine the culture of CSC. We refused to put the same ol’ CSC into shiny new facilities. We had to be sure that once the newness wore off, we wouldn't just be stuck with the same level of business with much higher overhead expenses.

I started out by creating a roadmap for the culture we wanted to create. Listing the company’s core values made it clear (to me and to the rest of the team) how we planned to differentiate ourselves from every other skydiving center in the world. It also made it much easier to hire and fire. I now had a litmus test for all existing and potential employees - regardless of my personal feelings of them. I’ve had to fire some of my good friends who had been with me for years, but I was able to do it knowing that my decision was an objective one and it was the right thing to do for the sake of the team culture and the future of the company.

Once we found like-minded people who were aligned with our objective of building something truly unique, the scales tipped. For years, I was fighting an uphill battle when it was me trying to mold my entire team by myself. Once we reached critical mass, the number of people who understood and became aligned with the vision began to outnumber the ones working against us. Teams typically gravitate to the masses. If a majority of the team are going above and beyond, they have a tendency to bring the weaker players up (or wash them out). All of the sudden, our staff had a bit more energy in the morning huddles, they were interacting more with the guests, they were pitching in to maintain and clean the facilities, and helping out more with miscellaneous projects. We now find that we’re able to be more selective in the hiring process because of our reputation. We treat our staff well and they in turn treat our guests well.

One of our main goals was to take a traditionally closed-off and exclusive type of activity like skydiving and turn that model around to be more welcoming and inclusive of spectators. Choosing to build the Flight Deck Bar & Grill into our facility has allowed us to truly serve our community as an exciting entertainment venue. It has also allowed us to host larger scale events and offer much more than the typical skydiving environment for everyone, whether making a first skydive, very experienced, or simply there to watch.

What we've been able to accomplish in just a few short years is pretty incredible. We are honored to be considered among the top skydiving facilities in the world, and it's flattering to be noted as an example of a skydiving company who is leading the industry in great business practices. It has been the biggest project I’ve ever undertaken and has been extremely rewarding. Nothing is more gratifying than to hear how impressed people are with our facilities. But we’ve always said, anyone can have nice facilities, it takes a special group of people to amaze everyone who walks in the door with a great experience.