The Earlybird Gets to Skydive

When it comes to skydiving, the most powerful factor in our ability to have fun is the one thing we cannot control - the weather.

You might hear the phrase "you can't jump if you're not at the dropzone" and that's completely true. But there are some things we know about weather that can help us define when we have the best chance of flying. Our goal here is to help you understand the weather that affects skydivers the most - and how you can set yourself up for success when scheduling your jump times.

The two conditions that matter most in skydiving are wind and clouds. As a student jumper, you will most likely have to learn the art of weather hold patience. And it will need to stick with you throughout your jumping career.

We all had to experience frustration as we went through the process to become licensed jumpers, which includes getting grounded. Whether it was due to wind speeds higher than recommended for your experience level, or not enough clearance from those pesky clouds right above the DZ - we have all been there.

It can be tempting to give up after you've invested yet another day in being at the dropzone, just to get weathered out. But, hang in there. It gets better. Can you believe that someday, you'll even make the choice to stay on the ground while others are jumping? It's all part of the learning process.

Where does wind come from?

We can study weather patterns, and understand when we are likely to have jump-able conditions. There is a better time of day to skydive, and you'll be one step ahead if you grab the best appointment times. The best time to skydive is the morning, and here's why...

The uneven heating of features of the earth by the sun also strongly influences wind because land and water are heated at different rates. As the air above land is heated by radiation from the sun, it expands, and begins to rise. To use our area as an example: the denser, cool air above Lake Michigan moves in to replace the rising warm air over the surrounding land. This movement of air is what makes the wind blow.

We also have localized winds and clouds that are influenced by convection. Convection is created by heating of the earth’s surface. You know how bubbles rise to the top of a pot of boiling water even though the heat source is at the bottom? That's the idea.

Convection is an upward atmospheric motion that transports moisture with it, resulting in cloud formation and sometimes thunderstorms. So, as the sun heats the earth, the warm air rises, and the water vapor in that air cools as it rises into colder temperatures aloft, forming clouds. The temperature difference between the ground and sky on a given day helps determine the altitude at which these clouds will collect. 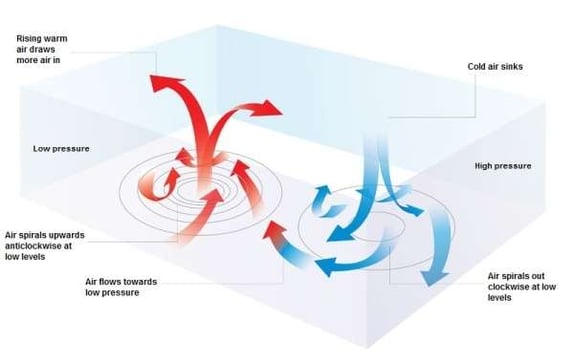 The dense collection of moisture-filled clouds builds a thunderstorm. In the Earth's effort to balance, eventually these storms will build to the point of needing to release rain. The storm creates a downdraft as rain-cooled air spreads out along the ground. This downdraft can create what meteorologists call a gust front, which is a line of gusty winds that moves along with the storm. If you've spent time outside when a rain storm is near, you have probably noticed the changes in wind and temperature that accompany the arrival of rain.

Why is the morning the time to skydive?

In general, you will have better luck with jump-able weather conditions in the morning. Earlier in the day, before the sun’s radiation is heating the earth substantially, winds will be calmer and convection less likely. This means fewer clouds, and less wind.

Of course, we can't control the weather, and can't guarantee which conditions we will face on any given day. But, we can generally recommend you plan to get up and get going when it comes to getting your skydiving day started. So, beginner skydivers (or anyone with self-imposed low wind limits) - we'll see you in the morning. The earlybird gets to skydive!